A new century in lab automation and digitization

Previous laboratory automations are expensive and with very limited flexibility. Most of them are complex and you need skilled system experts to install and use them.  Skills which a normal Lab employee didn´t have.  These specialized workstations investments are often used only some hours a day.  In many labs you find them unused in a corner of the lab. This is not the right economical solution for small and middle sized labs. Its far away from a sustainable and farsighted solution.

Due to different interfaces these workstations are not connectable to other Instruments. A digitalization of the lab is impossible. Interface – standards are years away.

So actual solutions are expensive, with limited flexibility, very complex, need system experts, not sustainable and with special interfaces.

Our new concept will change all these disadvantages with one simple solution based on new approach. One solution for many different workflows at different places.

We combined some very fast developing mainstream technologies from big industries with artificial intelligence for an easy to use in the lab. Very cheap, very flexible and with no need of interfaces.

The digitalization of the lab can start right now. High economical and sustainable

Which features would the ideal laboratory automation imply?

How is it possible to realize all these advantages, at the same time, while being less expensive than previous solutions?

This is possible due to a completely new approach: The smart combination of several rapidly developing mainstream technologies through „Artificial Intelligence“. The new possibilities develop a lot faster, broader and more stable than any classic laboratory automation ever could. Incredible things are already possible now e.g. the integration of devices in automated processes, which have no interface at all, to name just one example.

The centre of this new approach is a special, easy to teach collaborative robot. This ”Cobot“ can on one hand, work directly and absolutely safe with people hand in hand, and on the other hand operate a manual workplace completely on its own. It can transport different vessels from one device to another, while taking modified positions into account, pipetting, operating different devices and much more. Through the lenses of an 3D-camera on the Cobot, positions and their changes can be recognized by mixers or rotors and readjusted via AI. Barcodes, displays and keys can be read, interpreted and operated. Even results on the display of a device can be read, digitized and passed on via Wlan. This implies that an interface for integrating the devices is no longer needed and equipment that has already been proven in the laboratory with an unknown interface can still be used for automation. This is a big contribution to sustainability that also saves enormous costs and working space. Already existing devices from a manufacturer can be used without any changes or adapted interface.

Since in the phase, in which a laboratory begins to automate suitable processes, the workplace will not be fully occupied 24/7, so we designed a workplace change system. The same cobot with only 4kg lightweight can be moved from one workplace to another in just a few minutes and performing a different task. The shoe-rail- system enables a sliding and height-adjustable easy installation of the Cobot and that´s how it adjusts to the particular workplace. Using this technology the Cobot is able to do different jobs and for example sort pipette tips at night or keeping your tests running at the weekend. The Cobot is designed to reliably work 24 hours a day and 7 days a week for years. It has been designed to work in a continuous industrial operation with a working speed of 1m per second and a reproducibility of 5/100 mm.

Safer and more error-free than any human could ever be. 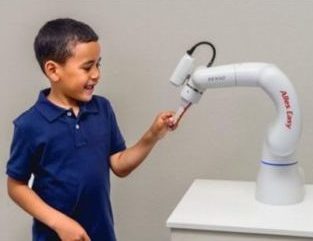 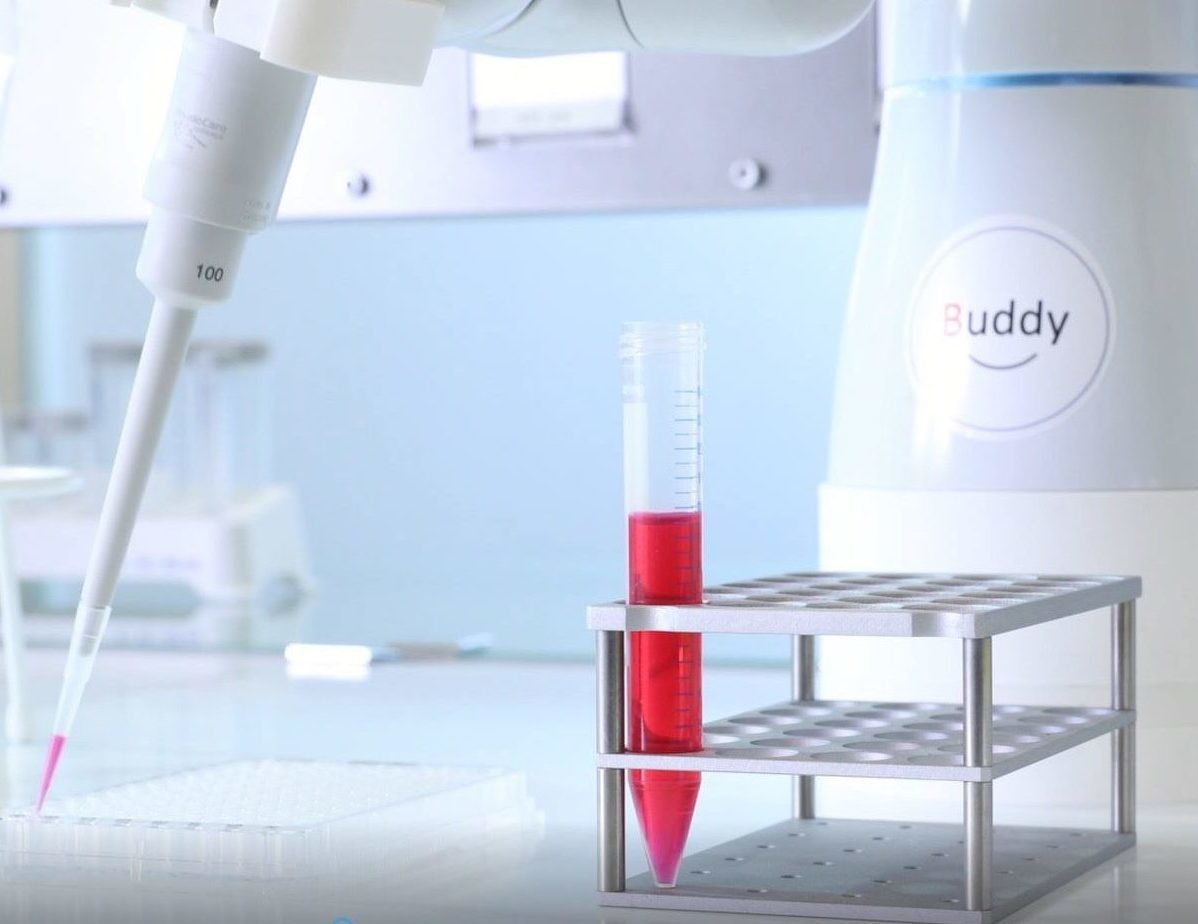 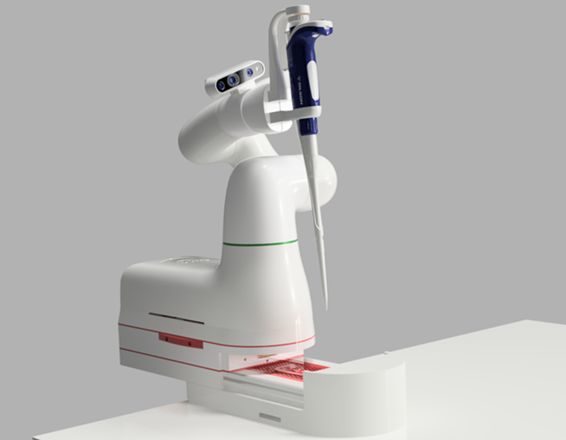 A modular and easy scalable system

A tall and slim Tower-Hotel, with a small footprint, was developed to provide lots of supplies for a high throughput. An inexpensive, multifunctional and fully automated high bay warehouse. The Tower-Hotel is a central element of this automation concept, as it connects the ”short range“ activities of 2  Cobots at a workplace with, future open, the „long range“ logistics in the laboratory by drones for example. It solves a range of various tasks in a simple and robust way. Standardized containers that can hold different formats of consumables, samples and reagents are stored in the Tower-Hotel. In addition to that there is enough space in the groundfloor to place an MTP- Reader for Elisa tests and a Mixer or a pipetholder.

In order to unify the logistics for the different vessels and formats in laboratories, a standard container was developed, that can incorporate various consumable formats via adapters and trays, making it possible for the cobot to remove or insert them. One container offers space for 4-5 MTP´s.

These compact, safe and stackable containers have some specific beneficial features. They feature two opposing and magnetically lockable doors, which can be operated by the cobot. If the container is in a specific position in the Hotel-Tower, where it can be accessed by the cobot, a second cobot on the other side of the Hotel-Tower can do so as well. This has the advantage that only one Hotel-Tower is needed to provide two workplaces. What is even more important is that two workplaces can be connected with each other. So you build a chain of connected workplaces for any application.

So automized parts of an applications can easily interlinked with each other. A modular expansion is possible step by step. At any time expandable and flexible at will. Thus each workplace can be operated with the same cobot or expanded with another cobot or, if necessary, completely manually operated within seconds. This really proofs the high flexibility and customizability to all laboratory needs and changes, while being completely safe.

Depending on the laboratory, single modules can be separated from each other with a far distance, or even be in a different room. The universal containers can be filled and stacked by hand and save transported by the lab personnel or by drone (transported securely fixed). Our System is ready prepared to work with this fast developing logistic technology.  Up to now it will take some time before we will see it in Lab, but a  performance boost can be seen every 6 months. They are getting safer, smaller, quieter and more efficient. At the same time prices are falling by around 20-30% per year. Drones will become the standard for logistics, for sure. So be prepared. We are!

The drones are practically spoken, many XYZ-transmitters operating parallel like in a workstation or labautomat, but instead for only some consumables on table for the whole laboratory.  Multi-sensor systems, cameras and much more allow a precise indoor-navigation, swarm control and landing within a millimetre on the landing-platform of the Tower-Hotel, which is the charging point of the drone as well. The cargo hold for the containers is assembled under the drone. This cargo hold can be operated by the automatic logistics of the Hotel-Tower, in the landing position. There is no need for an additional gripper. It is safe, simple and robust. Due to the height of the Tower-Hotel, the drone is never at the same height as the employees and the high bay warehouse technology bridges the height difference from the landing platform to the cobot „wirelessly“ by transporting the container. 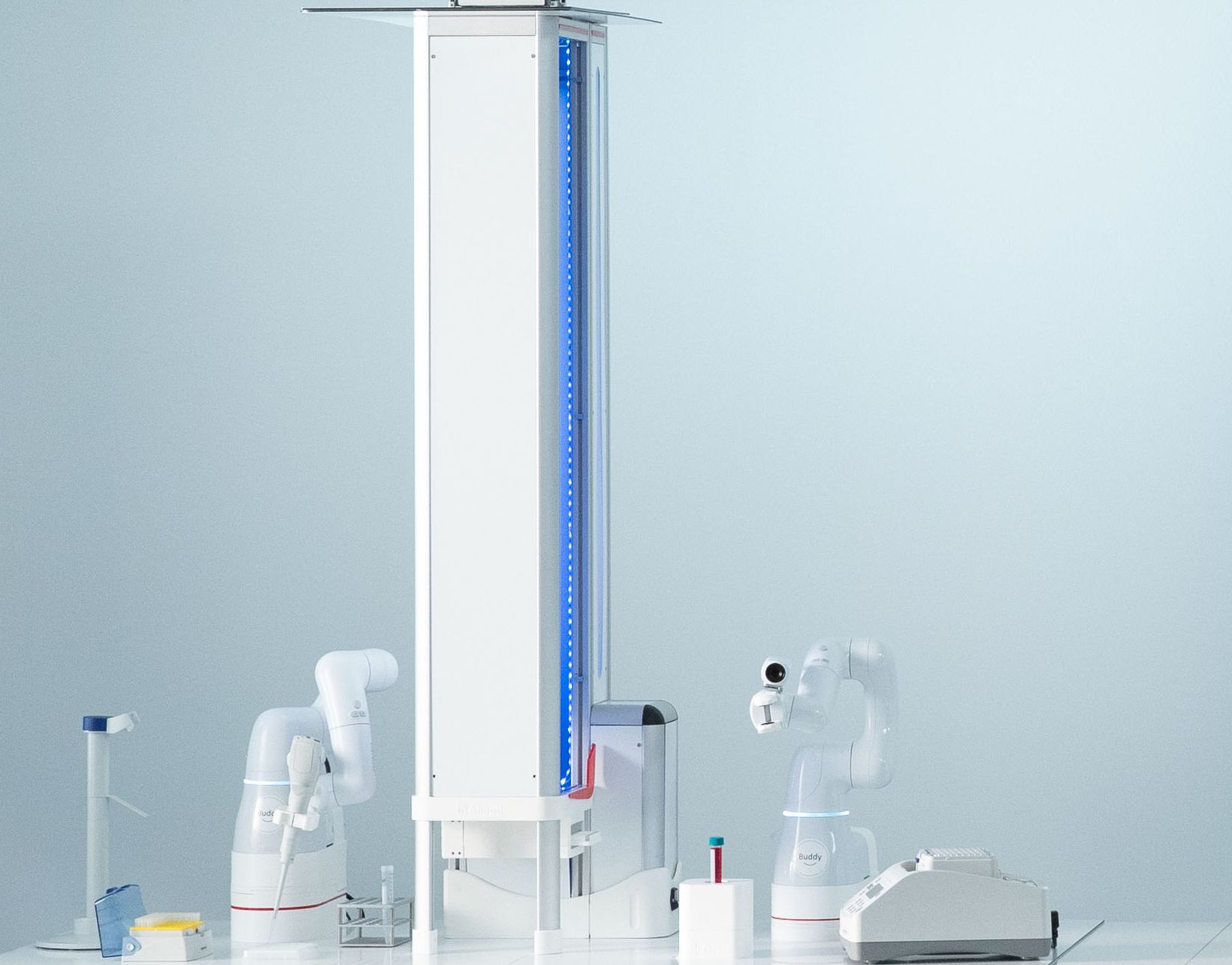 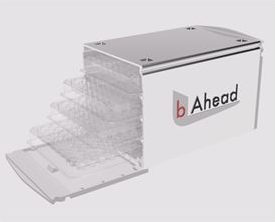 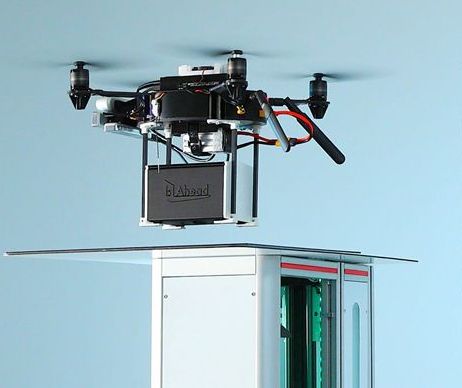 All components of the system are inexpensive, multifunctional and coordinated by artificial intelligence. Also the grippers of the cobot are multifunctional. The same Gripper can grip and carry microtiterplates or round tubes and also open them press buttons or turn knobs . If you need a change of the gripper, for example for a pipet, the cobot can do it by itself. He also can use wlan or blutooth pipets and use their advantages. So he could be your absolut flexible Liquid handling station as well as connecting the liquid handling wit the use of Instruments like mixers, thermostates, centrifuges, reader, washer and much more.

The system-control documents every step and secures the quality of the results. It is connected to a cloud which contains an open source database for cobot program modules, devices and consumables. All users and at some point manufacturers of devices, reagents and consumables build this database. The user can quickly install new applications himself by simply downloading the program modules, for a fee. A self-feeding system that converts the advance of this technology into a knowledge data base and thus outpacing the competition.

In addition, this is a splendid basis for another digital business model. Like a bank used to earn from every transfer, you earn from data transfers per fee and in addition from „verified program modules“ for the cobot. Once set up, the model feeds itself and then successively by manufacturers, who want to integrate their devices, as the margins for „program modules“ are even higher than with consumables.

Superior in all aspects

Enormous cost, speed and quality advantages result, because of the many advantages that the system offers over the manual laboratory or other automation solutions. If changes in processes of the laboratory, organizational changes are being made or if the test volume or type of test changes, it can always be flexibly adapted and without any interface problems. It´s the only system that has no need of any device interfaces.

The competitiveness of the laboratory can be increased in such way, that a multiple of the sample volume can be processed at a split of the cost and this laboratory becomes the choice in a large area. This triggers a landslide effect. The future laboratory will be digitized in the simplest way. The cobot and its ecosystem will become the standard, due to the many named advantages and its rapid development.

If we include the rapidly developing possibilities due to AI, we can identify that this will become the predominant type of laboratory automation in large areas of the laboratory. This is an ecosystem that is designed for security and is still quite inexpensive, due to its multifunctionality and thus ensures high margins for customer consulting, devices and software.

In addition, it is by far the most sustainable solution on the market. Existing devices, even without an interface, can continue to be used. The cobot can work at several workplaces 24/7. All system components can be used as often as required in altered processes. The Tower-Hotel is multifunctional and inexpensive. The cobot can easily adapt waste separation in the laboratory, including an automatic consumable replenishment supply according to the Kanban system. It will be the most sustainable and universal system on the market and will continue to expand by using mainstream technologies.

This innovative automation is evolutionary. It´s based on existing products and partial-automation and is by far the most sustainable solution imaginable. It is absolutely safe, very simple, flexible, fast and inexpensive. It is modularly expandable as it is required and manually operated in a few minutes at any time.

You don`t have to wait for new interface standards an becoming real.

You can start digitizing your lab just now.